This article shows how to simulate correlated random variables, for any probability distributions, using the R programming language. No additional R packages beyond the functions found in base R will be needed.

In the example below I will generate three variables that are correlated with each other. Two are Poisson distributed count variables, while the other is a normally distributed continuous variable.

We will use the Gaussian copula to specify correlation between variables from different distributions in 3 steps:

Simulating data is a crucial component of statistical modeling and helps you understand your model and data better (see Section 4 of Bayesian Workflow by Gelman et al. for more in-depth coverage).

I have recently been using multilevel models with varying slopes and intercepts and needed to simulate correlated data to ensure my models were working as expected. There are scattered resources on how to do so and different software packages that will automate the process, but I wanted to cement my understanding (and play around with a little linear algebra).

For this walkthrough, given that I’m a surgical resident, let’s simulate some variables for intra-operative surgical performance. We will generate four variables, three correlated, and one not. The variables will be as follows:

Now we will sample from the multivariate normal distribution, MVNormal(0, Sigma). R does not have a MVNormal sampling function built-in. You can either use the one in the MASS package, or use the function below to replicate it with base R and some linear algebra:

Now let’s generate the distributions for ak, pp, and ptime. I named it APT to remind us which variable is in which column of the returned matrix:

You can see that the variables are correlated as we wanted: 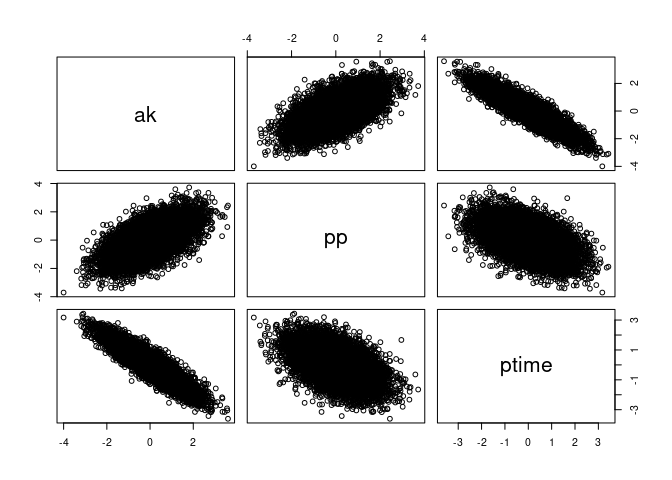 And that each is just a normal(0, 1) distribution. Take ak for example: 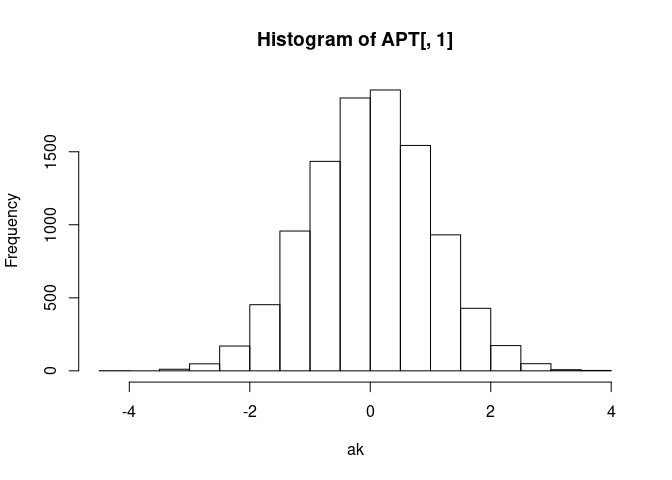 We know the probability distribution that generated them is Normal(0, 1), so we can use the pnorm() function in R to apply the CDF for the normal distribution and make the uniform distributions, U (a matrix with one column for each variable): 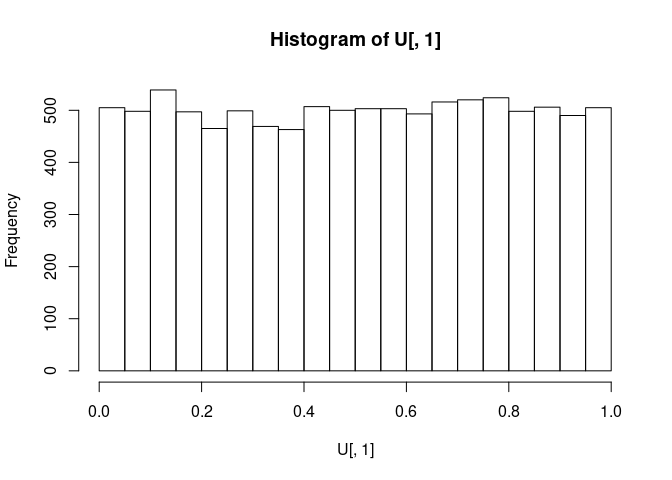 As expected, it is a uniform distribution from 0 to 1.

As we see below, these are still correlated, just like we wanted! 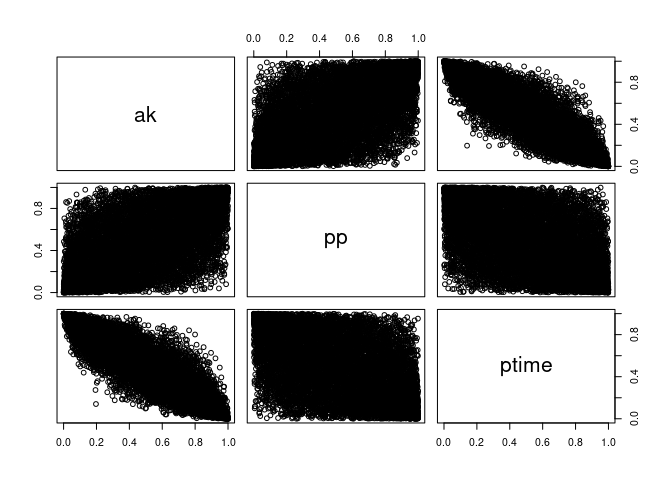 Now that we have correlated uniform distributions for each variable, we can do inverse transform sampling by applying the quantile function for the desired probability distributions.

Our air knot variable, ak is in the first column of U. We will make it a Poisson distribution with an average number of air knots of 5 per case.

We can transform the first column of U, U[, 1], to match that distribution with the qpois() function: 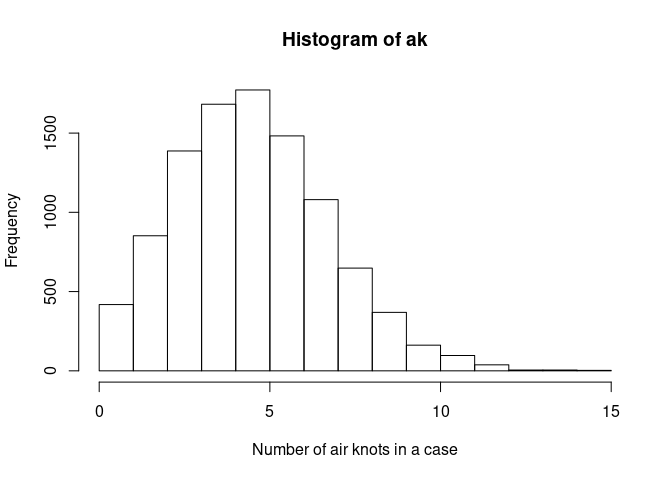 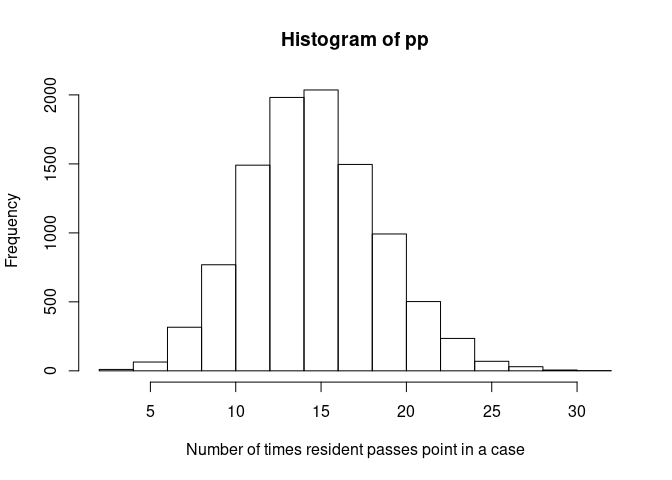 Our practice time variable, ptime, is in the third column of U. It represents the amount of time, in minutes, the resident spent practicing that week. We will make it a Normal distribution with a mean of 120 and standard deviation of 30.

Since we want a Normal distribution, we will use the quantile function qnorm() on the third column of U, U[, 3]: 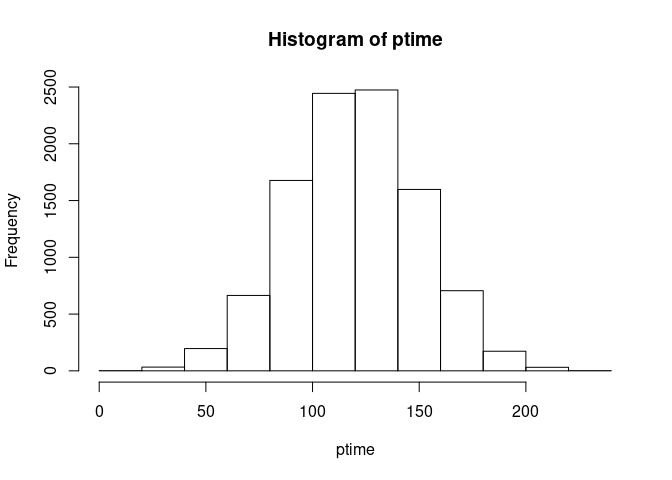 We do not need to sample this with MVNorm since it is not correlated to our other variables. We know sizes are between 5.5 and 9 and likely follow a normalish distribution that is centered around the midway point of 5.5 and 9 (7.25) with only a few outliers: 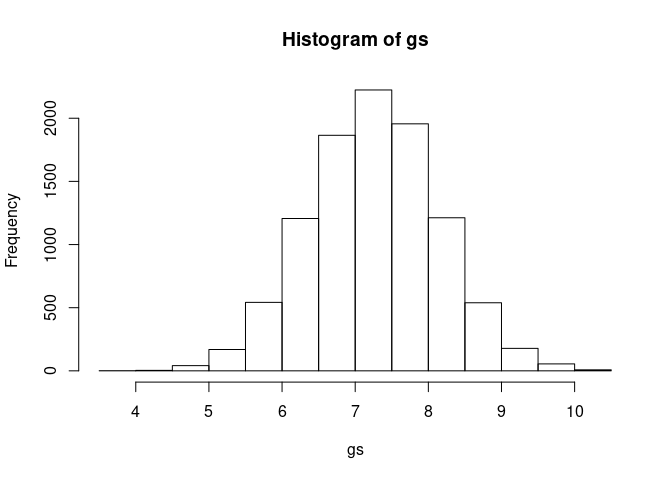 Now, after all the variable manipulation, did our original desired correlations hold up?

To remind ourselves, we wanted:

Perfect, everything simulated and kept the desired correlations!

We can visualize their correlations with pairs(): 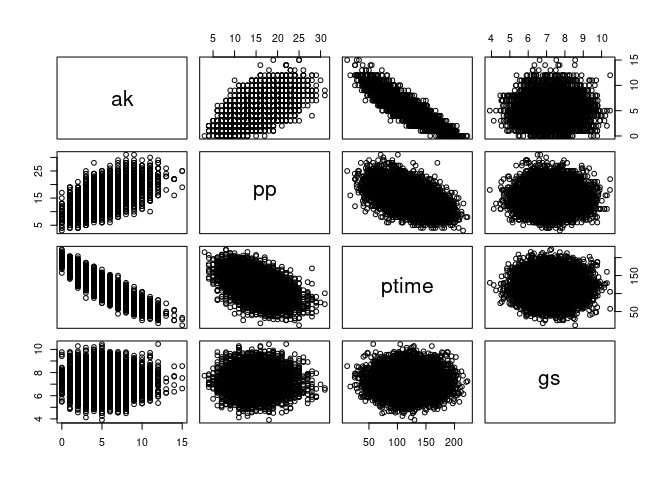 Now we are set to experiment with this simulated data.

I hope this article helps! Enjoy simulating complex relationships in data and seeing if your statistical models work and can recover their parameters. Please contact me with any questions or input on the article using any of the methods on my contact page.