The below guide documents how to install Windows Subsystem for Linux 2 (WSL2) and configure X11 forwarding so graphical programs run from inside WSL2 display locally on Windows. Unlike the other existing guides, it does not let Windows Firewall open up the X11 display server port to the entire world, so you have improved security.

This guide will walk you through:

Installation instructions are available from microsoft here. I recommend doing the manual steps to avoid having to join the Windows Insider Program and install a preview build of Windows. Make sure to follow the instructions for WSL2, not 1. You can pick any Linux distribution you want. The instructions below are confirmed to work with Ubuntu.

You will now need to configure Windows Firewall to permit connections from WSL2 to the X11 display server. You will install the display server in the next step. We do this step first to avoid Windows Firewall from auto-creating an insecure firewall rule when you run the X11 display server. Many guides on X11 forwarding and WSL2 make this firewall rule too permissive, allowing connections from any computer to your computer. This means someone could theoretically, if they are on your same network, start sending graphical display information to your computer.

To avoid this, we will make Windows Firewall only accept internet traffic from the WSL2 instance.

To set this up, you can copy the below to a script and run it from within WSL2:

Alternatively, you can manually add the rule through a GUI by doing the following:

If you already had installed an X11 server, Windows may have created firewall rules that will mess with the above configuration. Search for them and delete them in "Windows Defender Firewall with Advanced Security."

Graphical programs run inside linux need a "display server" that will do the hard work of displaying the program and processing mouse and keyboard input. On Linux, traditionally this has been done by the X Window System, X11. X11 was designed in an era where most programs, called clients, were run on a powerful central computer. The clients graphical output was then sent over the network to the user's computer then displayed on its monitor by the "display server."

For our setup, the WSL2 linux programs that display graphics will be our "clients." For example, you are running R in WSL2 and want to display plots. They will send information to Windows, and therefore you need to install an X11 server on Windows that will take their information and display it graphically.

I recommend installing VcXsrv Windows X Server. When you install it, accept the default options. It will not autostart or run after installed. If there is an option to start VxSsrv after install, do not accept this option.

You now can start the X11 display server, VxXsrv. I recommend making it automatically start with windows so you do not need to manually start it each time you restart your computer.

To create an autostart for VcXsrv:

Last, you need to configure WSL2 to know where the X11 display server is located for graphical client information.

To do so, you need to configure WSL2 to:

The WSL2 IP address frequently changes, which causes problems for a lot of people. It also is the reason that most guides to setup X11 forwarding make the Windows firewall rules too permissive, and thereby open your computer to the world to access.

We can solve all the above problems by putting the following at the end of your ~/.profile:

All set. Sometimes when you launch a new terminal window, you will notice a slight delay and a Windows User Account Control box asking if you want "netsh.exe" to make changes to your advice. This is normal, so always click "Yes" as this is WSL2 updating the firewall rules to keep X11 forwarding working.

Test out your new setup by running a graphical application in WSL2. An easy option is to start R and run hist(cars$dist). A histogram should appear: 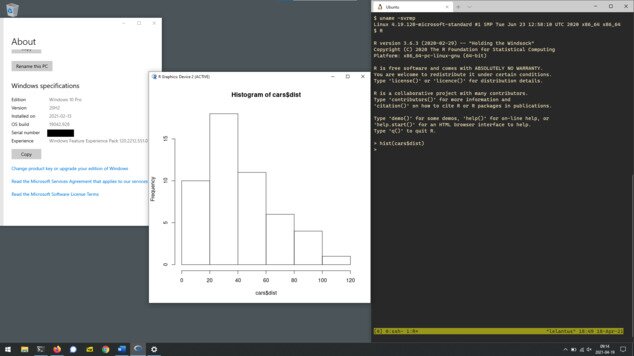 I hope this article helps! Please contact me with any questions or input on the article using any of the methods on my contact page.